“I see the world through a viewfinder. The work that I do is about the diversity of pollinators, their importance in our food supply and ecosystem, the beauty and the awe, and how we can protect them. Bees are responsible for pollinating one-third of the food we eat. They are crucial to our ecosystem.” – Kathy Keatley Garvey

On most days, you’ll find Kathy Keatley Garvey outside finding, photographing and documenting insects, especially pollinators. This Communications Specialist for UC Davis Department of Entomology and Nematology – as well as a 4-H county program – is passionate about sharing her knowledge with others.

That passion shows. Her pollinator photography has received international recognition and her well-respected Bug Squad blog was named one of the top 10 “bug blogs” in the world by a New York firm. We knew she was the ideal person to get the dirt on pollinators and make us look differently at insects. 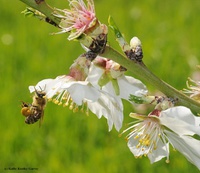 A honey bee packing pollen for return flight to hive, after foraging on almond blossom.

Kathy Keatley Garvey: My love of writing, photography and fascination with insects, especially honey bees, stems from my childhood. I descend from a long line of American agriculturists and beekeepers, dating back to the 1700s. I grew up on a 300-acre dairy, strawberry and timber farm in Washington state that borders the Cowlitz River. I remember warm summer days with the sounds of bees buzzing around me as they pollinated our apples, cherries, raspberries, blackberries and half-acre vegetable garden.

In addition to their pollination services, the bees provided us with another gold: honey. I treasure the memory of my beekeeper/farmer/school-board-trustee father mixing honey with butter and spreading it on freshly baked yeast bread. We basically lived off the land before “sustainable” became a buzz word.

As far as photography, I’ve had a camera as far back as I can remember. My childhood camera was a point-and-shoot that did, as it was told to do, point and shoot! Later at Washington State University, Pullman, (where I received degrees in communications and journalism) I eagerly pursued writing with words and writing with light (photography). I went on to become a newspaper editor and then a UC Davis communicator. 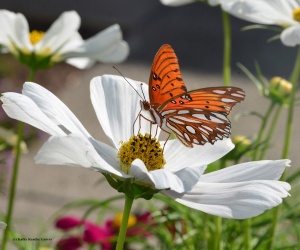 Documenting insects just came naturally: from a childhood on a farm, to reading about them, to participating in entomology classes and seminars, to just admiring them. My husband/horticulturist installed a pollinator garden, where I observe and photograph the diversity of insects that come to visit, live and stay. In fact, we removed our pool to expand the bee garden. We do not have a lawn.

On Aug. 6, 2008, I began writing a Bug Squad blog on the UC ANR website to share the fascinating world of insects and the entomologists who study them. I believe that the more we appreciate and understand insects, especially pollinators, the more we can protect them. 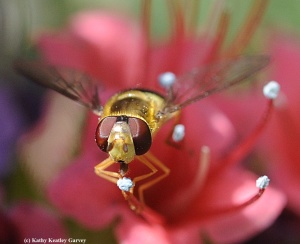 A syrphid (aka flower fly or hover fly) on tower of jewels (Echium wildpretii).

Kathy Keatley Garvey: One of the ways is to keep focusing on pollinators with content and photos. I write the Bug Squad every night, Monday through Friday, and have never missed a posting since I launched the blog on Aug. 6, 2008.

What most people don’t know is that the blog is a volunteer project; it is not part of my job description, but it is part of my life. It’s about the passion, not the paycheck.

Sometimes, however, I feel we communicators have a long way to go, especially when adults ask me “What’s entomology?” or when teenage girls run screaming from the very sight of a foraging Valley carpenter bee, like a girl did on the California State Fair grounds. “That’s a carpenter bee, a pollinator,” I told her. “It won’t hurt you.” 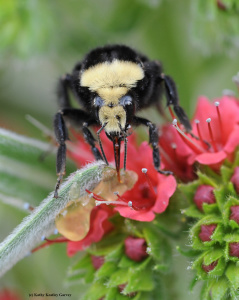 Kathy Keatley Garvey: My camera gear includes a Nikon D800, a 36-megapixel camera, with four macro lenses: 105mm (my favorite), 60mm; 200mm and a 55mm. I shoot with available light and a Nikon Speedlight 910. My equipment also includes a couple of Nikon D700s, and a Canon 7D with a 100 macro lens and an MPE-65mm lens. I often shoot without a tripod to allow more freedom and flexibility. Also in my camera bag: a Nikon P340, a point-and-shoot, primarily for macro images. 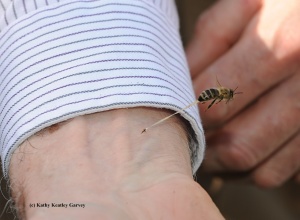 Kathy Keatley Garvey: I had just finished attending a meeting in the Harry H. Laidlaw Jr. Honey Bee Research Facility and was on my lunch hour. (As most people know, I would rather take images than eat and I almost always have a camera slung over my shoulder.) Extension apiculturist Eric Mussen (now retired) and I were walking through the apiary and a bee buzzed around his head.

Eric said, “Kathy, get your camera ready, the bee’s going to sting me.” I swung my camera around and got four shots in less than four seconds.

The second image went viral. It won best feature photo from the international Association for Communication Excellence in Agriculture, Natural Resources, and Life and Human Sciences, was named one of Huffington Post’s most amazing photos of the year, and was named one of the Sacramento Bee’s top images of the year, among the other accolades.

However, many of the comments on the Internet were disconcerting. Some said I spent all day in the lab killing bees to get that photo. Wrong. I’ve never killed a bee in my life except for the one I accidentally stepped on in Honolulu while I was walking along a beach. Some people criticized me for not helping the “victim;” they accused me of endangering a life. Some people argued that it’s a wasp, not a bee. And, some still blame me for killing a bee!

Little do they know that a queen bee, in peak season, can lay 2000 eggs a day, and that worker bees live only four to six weeks in the summer. Guard bees defend their hive from threats or perceived threats, and this is what occurred. 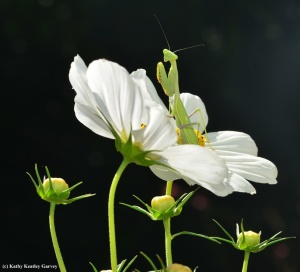 Praying mantis in a cosmos flower.

Kathy Keatley Garvey: When I was studying journalism, communications and science at Washington State University, we were told to write at the eighth grade level. We were told to tell the story, to paint the picture, to engage the reader. Unfortunately, words get lost in an ocean of gray text, but photos jump out at you.

I see the world through a viewfinder. The work that I do is about the diversity of pollinators, their importance in our food supply and ecosystem, the beauty and the awe, and how we can protect them. Bees are responsible for pollinating one-third of the food we eat. They are crucial to our ecosystem.

Kathy Keatley Garvey: I went from the darkroom to digital. I spent several decades working in the darkroom, processing film and making prints, breathing in hypo, so I guess I’ve paid my dues. We learned the controls: f-stop, shutter speed, ISO and depth of field. Today many of the point-and-shoots will give you excellent, high-resolution images with the push of a button. 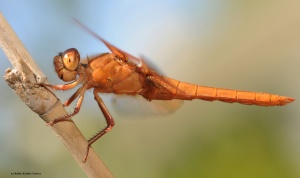 I’m glad to see there’s more of a widespread interest in photography now, what with selfies, iPhones and people’s avid interest in photographing food before they consume it! I hope their interests will expand to taking images of insects as well: the industrious honey bee, the furious red of the flameskimmer dragonfly, the glide of the monarch butterfly.

Copyright is definitely an issue and something that professional photography associations are trying to address. Most people probably aren’t aware that the minute you take a photo, it’s yours and it’s copyrighted.

If you register your image with the U.S. Copyright Office—it costs $30—you gain legal teeth. The Professional Photographers of America hopes that one day we can defend our rights in small claims court.

It’s true that photographers are underappreciated and often disrespected. For example, you would never think of walking into an art gallery and stealing a painting from a wall, or stealing a Ferrari parked outside your home. But on the Internet, the premise seems to be: “Hey, I found it, so it’s mine!” 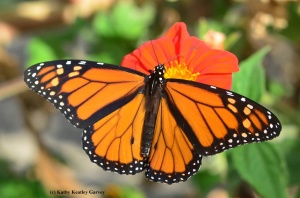 Kathy Keatley Garvey: Just being around pollinators is inspiring; it’s getting in tune with nature in a sometimes chaotic world. When I was recovering from cancer surgery back in 2010, I’d spend hours in our yard, just watching and photographing the pollinators. I am sure it aided in my recovery. It may have saved my life.

We have about 20,000 species of bees throughout the world, and the honey bee is just one of them. We can all do our part. Replace your lawn with a bee garden. Don’t use pesticides. Reserve a space for the ground-nesting solitary bees. Provide nectar and pollen sources and water. I think once people appreciate the pollinators, they’ll do what they can to save them.

Kathy Keatley Garvey: I rear monarch and Gulf Fritillary butterflies for conservation. There’s pure joy in rearing them from a caterpillar to a chrysalis to an adult and releasing them in the wild. I know that predators need to eat, too, but I’d rather they not eat my butterflies. 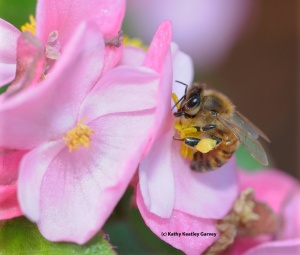 A bee on a begonia flower in Garvey’s garden.

I taught photography to Solano County 4-H’ers for 10 years. We took field trips, worked in the darkroom, selected our best photos and entered them in county fair competition. I always found something good about every photo taken.

Blurred image? Oh, but look at that composition! Telephone pole growing out of someone’s head? Oh, but look at that engaging smile on his face. Several of my 4-H’ers went on to win state and national awards. Bottom line: photography is fun! It’s living in the present and stopping a moment of time.

Thanks so much for your time. 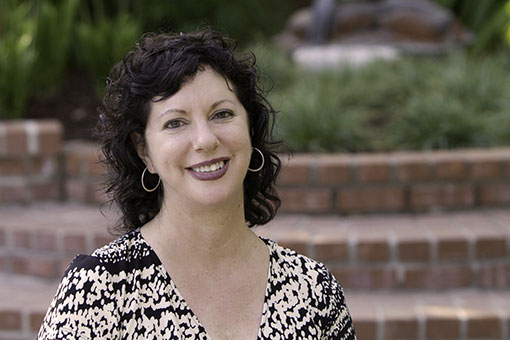 Teresa O’Connor is the assistant editor of UC Food Observer. A former journalist, she has written and spoken about food trends, edible gardening and sustainability for national magazines, leading industry events and well-known brand names. Trained as a Master Gardener in California and Idaho, Teresa has written for both states’ extension services about food gardening.

UC Food Observer is your daily selection of must-read news on food policy, nutrition, agriculture and more, curated by the University of California as part of its UC Global Food Initiative.

Copyright © Regents of the University of California