The latest service to be revolutionised by drones might not be package delivery or internet connections but the far more valuable service of pollination. Researchers in Japan have been exploring the potential of using miniature drones covered with sticky hairs to act like robotic bees to counter the decline of natural pollinators.

Writing in a paper in the journal Chem, the team demonstrated their drone on an open bamboo lily (Lilium japonicum) flower. With a bit of practice, the device could pick up 41 per cent of the pollen available within three landings and successfully pollinated the flower in 53 out of 100 attempts. It used a patch of hairs augmented with a non-toxic ionic liquid gel that used static electricity and stickiness to be able to “lift and stick” the pollen. Although the drone was manually operated in this study, the team stated that by adding artificial intelligence and GPS, it could learn to forage for and pollinate plants on its own.

But it takes more than just sticky hairs to be a good pollinator. As someone who studies pollinating insects, I think these drones have a lot of catching up to do to match our existing pollinators, which include bees, butterflies and even some larger animals, in all their diversity. But it is always good to see science learning from nature and these studies also help us to appreciate the wonders of what nature has already provided. 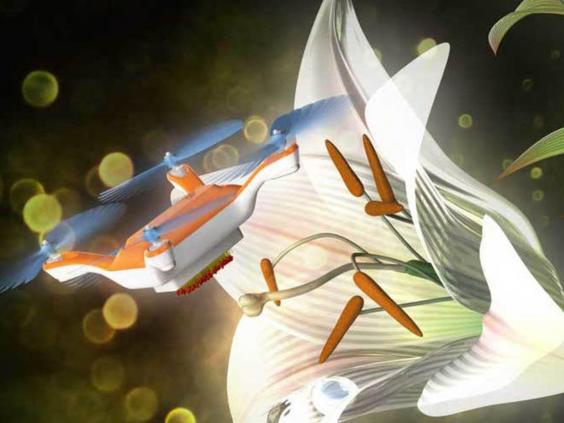 Pollination is complex task and should not be underrated. It involves finding flowers and deciding if they are suitable and haven’t already been visited. The pollinator then needs to successfully handle the flower, picking pollen up and putting it down in another plant, while coordinating with its team and optimising its route between flowers. In all of these tasks, our existing pollinators excel, their skills honed through millions of years of evolution. In some cases, our technology can match them and in others it has some way to go.

The three major factors that make insect pollinators, such as bees, so good at what they do are their independent decision making, learning and teamwork. Each bee can decide what flowers are suitable, manage their energy usage and keep themselves clean of stale pollen.

Modern drones can already achieve this level of individual management. As they have the technology to track faces, they could track flowers as well. They could also plot routes via GPS and return to base for recharging on sensing a low battery. In the long run, they may even have a potential advantage over natural pollinators as pollination would be their sole function. Bees, on the other hand, are looking to feed themselves and their brood, and pollination happens as a by-product.

The areas where drones need development, however, are learning and teamwork. Flowers are also not always as open and simple as those of the bamboo lily and quite a few of our commercially pollinated food resources have much trickier flowers (such as beans) or need repeated visits (such as strawberry flowers) to produce good fruit. 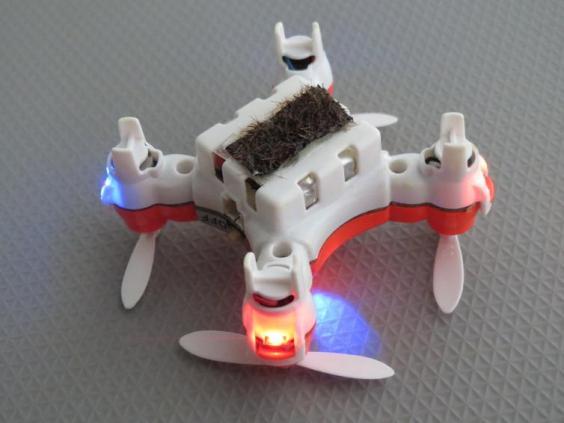 To solve this, bees learn and specialise on a specific flower so they can handle them quickly and efficiently. They also learn the position of rewards to learn the best routes. With all individuals in the team doing this, they divide their labour and get a lot more done. To replicate this in drones would involve some serious programming and the ability of the drone to change its behaviour or shape to adjust to flowers, or having different drones for different jobs as we have different species of pollinator.

Having more than one drone requires coordination and preferably non-centralised control, whereby individual drones can make their own decisions based on information from their colleagues and a set of simple rules. Honeybees have the ability to recruit others to rich floral rewards using movements known as the waggle dance. Bumblebees can tell if a flower has already been visited by the smell of the footprints left by previous visitors. All these adaptations make our pollinators very efficient at what they do. Similar skills would have to be developed into a team of pollinating drones in order for them to work as efficient pollinators.

Although I feel that these robots are a long way away from becoming the optimal pollinators, they may well have a place in our future. I could see these drones being used in the environments that are unsuitable for natural pollinators, such as a research lab where precision is needed in the crossing of plant breeds. Or even in a biodome on Mars where a swarm of honeybees may not be the safest solution. It will be interesting to see what else robotics can learn from our insect pollinators and what they can improve upon.

This article was originally published on The Conversation (www.conversation.com) Elizabeth Franklin is a demonstrator in Biosciences at Bournemouth University