Queen Rearing via the Notching Method

The ability to rear queens is absolutely essential to the long term success of any beekeeping program. Grafting is the standard method by which large numbers of queens are produced from a specific genetic source. It’s quick, simple and efficient. However, if you just have a couple of colonies in the backyard, or if you only need a few queens at any given time, grafting is simply not very practical. If you fall into either of these categories, you may want to consider notching.

Notching is a simple non"grafting queen rearing technique. Simply put, notching is the practice of removing or destroying the bottom cell wall of one or more worker cells containing young larvae of queen rearing age. When you remove the queen from an established colony, when you divide a colony or makeup a new split, the queenless colony will immediately begin constructing emergency queen cells. If you employ the notching technique the queenless colony will focus its emergency queen rearing efforts on the larvae in the notched cells. By notching, the beekeeper in effect determines which larvae the colony will utilize to produce their replacement queen. The notching method I describe below is ideally suited to the small operator who needs a few queens to maintain his or her beekeeping endeavor.

I normally use five frame nuc boxes for all my queen rearing needs, but three or four frame units will work equally well in this application. From the breeder or donor colony I remove one frame containing a small amount of eggs and well fed young larvae. My intent is to rear a quality queen using a relatively small number of young nurse bees. I don’t want large amounts of brood competing for the food and heat resources of the small rearing colony. Once I’ve transferred the brood frame and its adhering bees, I remove a second frame containing some recently collected pollen and as much nectar as possible. The older adults on this frame are shaken back into the parent or donor colony. If pollen and nectar are in abundance I generally remove a second feed comb. Again, due to the absence of brood in the rearing colony, the two well filled feed combs should provide sufficient stores until the new colony becomes established. Two empty drawn combs, to provide storage for incoming nectar, complete the five frame unit. The last step in the setup process is to supply the nuc with nurse bees. With a five frame nuc box, place the frame containing the brood in the center slot and position a feed comb to either side. Return to the donor colony and remove two additional frames con- taining mostly open brood, check for the queen, then shake the bees into the open nuc box. Young nurse bees are the prime ingredient for successful queen rearing, so don’t be stingy. If the weather is on the cool side, or if the rearing colony is to remain in the same location as the breeder colony, compensate by shaking in a third frame of young adults. Once all of the ingredients are in place, close the colony up to let the bees settle down for a couple hours prior to notching. Likewise, if the colony needs to be relocated, complete that procedure before you notch.

Larvae twelve to eighteen hours old are generally considered the optimal choice for grafting purposes. The same rule applies to notching. In practice the notching procedure takes only a couple of minutes. Start by scanning the brood comb to determine which side contains the most larvae of correct age or size. Also check the amount of royal jelly that surrounds the young larvae. Well fed young larvae produce better quality queens than do poorly fed larvae. Notching allows you to make that choice. Once you have selected the appropriate side, lay the frame so the notching side is up, across the top of the open nuc box. With a soft bee brush, gently move the bees away from the area containing the young larvae. Using either the point of your hive tool or pocket knife, notch two cells, two or three inches apart, preferably on the upper half of the comb. Push a thumbtack into the top bar directly above each notched cell. These will be your reference markers when you check back in six or eight days to view your handiwork.

Thumbtacks on the top bar directly above the notched cells

Return the brood frame to the center of the nuc box and place the feed comb containing the fresh pollen adjacent to the notched cells. That’s all there is to it, close up the colony and be on your way.

Six or seven days after notching, the notched cells and most of the worker brood will be capped over. Use the reference thumbtacks to locate and visually inspect the notched cells. They should appear somewhat larger than the run of the mill emergency queen cells. 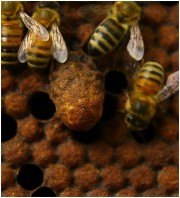 Notched cell, the equivalent of a supercedure cell

Remember, by notching you enlarged the area immediately below the young larva. The colony responded by building the equivalent of a supercedure cell directly into the comb, hence the larger than normal appearance. If the notched cells appear normal, check for and remove all the natural cells around the periphery of the capped brood, on both sides of the comb. Invariably, most of the natural cells will have originated from older larvae; consequently, one of these queens will emerge first and destroy all your hard work. In those cases where the notched cells haven’t been accepted, or where they appear to be inferior, leave the two best looking natural cells. Either way, in sixteen to twenty one days you should have a nice laying queen. 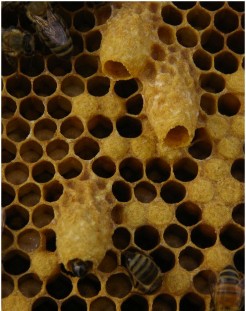 Emergency cells, built in addition to the notched cells.