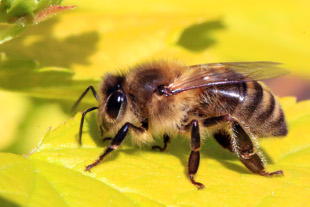 Honey bee colony losses concern beekeepers and agriculturists alike, as Apis mellifera are important crop pollinators. A pair of factors that affect the health of honey bee colonies are the mite, Varroa destructor—which parasitizes honey bee larvae—and the pathogenic deformed wing virus (DWV), which V. destructor can transmit. Scientists have long tried to understand the details of the mite-virus-bee ecology. It was already known that DWV benefitted from its association with the mite, as the parasite helps the virus spread. But it had been less clear whether the mite gained anything from serving as a viral vector. It turns out that mites show more reproductive successes when parasitizing honey bees with active DWV infections, according to a study published today (March 7) in PNAS.

“We provide evidence supporting the occurrence of a mutualistic symbiosis, unrecognized so far, which accounts for the severe impact of this parasite-pathogen association on honeybee health,” study coauthors Francesco Nazzi of the University of Udine and Francesco Pennacchio of the University of Naples Federico II, both in Italy, told The Scientist in an email.

“Nobody was expecting this,” said University of Salford ecologist Stephen Martin, who was not involved in the work.

A mother V. destructor mite parasitizes a larval honey bee by entering its brood cell before it is capped, poking a hole in the insect’s abdomen through which to feed, and reproducing within the sealed brood cell. “It was believed that the virus was just passed mechanically,” Martin said. The mites, it seemed, “were effectively syringes” for the virus. It now appears that the mite benefits from spreading the virus.

Nazzi, Pennacchio, and colleagues previously suggested that DWV weakens the bee immune system by affecting proteins of the NF-κB family of immune-response genes. The researchers hypothesized that the bees’ weakened immune systems might make them more tolerant of mite parasitization.

For the present study, the researchers probed the correlation between the bees’ DWV levels and the strength of their immune responses. The team tested the bees’ immune responses by testing their abilities to coat a nylon thread in melanin and other materials, as they would react to most other pathogens. The researchers found that bees infected with more copies of DWV were less able to melanize the thread effectively.

The researchers then explored the relationship between DWV infection and genes involved in bee immunity, including members of the NF-κB signaling pathway. The researchers used RNA interference (RNAi) to knock down expression of NF-κB-family member Dorsal-1A, finding that levels of Amel\102—the bee homolog of a butterfly gene involved in melanization—were reduced. This suggested that Amel\102 expression is influenced by that of NF-κB. In bees with higher levels of the virus, Amel\102 levels were decreased, while levels of a gene that impairs NF-κB activation—Amel\LRR—were increased. These results, the authors suggest, indicated that DWV impairs the honey bee immune system by blocking NF-κB signaling.

The team also examined reproductive success of mites infesting DWV-infected bees. The proportion of reproducing mites increased in those infected with more copies of DWV, the researchers found.

“Their work to show that there’s a correlation between immune genes and DWV levels [is] interesting, but I don’t think that correlation is necessarily the same as indicating a direct causation,” said Diana Cox-Foster of the US Department of Agriculture’s pollinating insects unit, who was not involved in the work. “I still question whether it’s a symbiotic relationship, per se,” she added.

Together DWV and the honey bee-parasitizing mite present a powerful threat to honey bee health worldwide, noted Norman Carreck of the University of Sussex, U.K., who was not involved in the study. “Colony losses around the world are very commonly associated with deformed wing virus,” he told The Scientist. “In my view, Varroa remains the main threat to beekeeping worldwide.”

A better under understanding of their ecology, Nazzi and Pennacchio told The Scientist, “will support the definition of new strategies to prevent colony losses.”