Working in his lab at Texas A&M University in College Station in August 2006, Vaughn Bryant, garbed in a lab gown and gloves, gently lifts the blood-spattered clothes from the brown paper bags they’ve been stored in for decades. 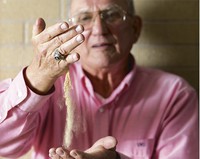 He lays the clothes out, a button-down plaid cotton shirt, tan corduroys, blue socks, brown ripple-sole shoes, a pair of underwear, a bra and an oversize red windbreaker with black stripes down the arms, too large for the petite frame of the girl who wore it. Bryant has everything but the turquoise necklace the girl, known only as “Caledonia Jane Doe,” was wearing on November 10, 1979, when she walked into a cornfield in western New York and was shot twice, once in the back and once in the back of the head.

She has no identification, and over the years, she has never matched any missing persons report. Her body lay there all night just outside the small town of Caledonia, New York, rain washing away most of the evidence. By the time a farmer discovered her the next morning, the killer was long gone. The only hints law enforcement had about where she came from were the tan lines on her skin.

She was buried in a local cemetery under a stone marked “Jane Doe,”although investigators had quickly nicknamed her “Caledonia Jane Doe,” or “Cali Doe” for short. In the following years, tips poured in to leading law enforcement officers from all around the country. John York, the first officer on the scene, was eventually elected sheriff of Livingston County, and he continued to pursue the case. During his decades as sheriff he traveled to prisons in Texas and Florida to interview 64 serial killers who claimed to be the murderer.

Read the rest of this story from the Houston Press Here