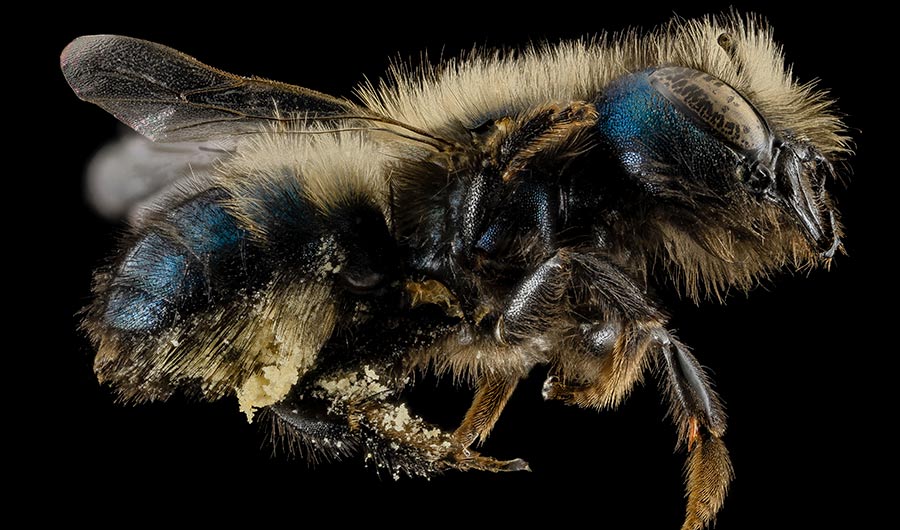 Colony collapse disorder has devastated honeybee populations over the past decade and brought a major push from beekeepers and scientists to commercialize a native pollinator for orchards in California and beyond. The most promising pollinator for the job is the blue orchard mason bee (Osmia lignaria). The challenge: figuring out how to produce enough of the finicky tunnel-nesting bees without depleting wild populations.

The blue orchard mason bee, or BOB for short, makes individual nests for its young in hollow plant stems and leftover beetle burrows in wood. Humans can coax them to nest densely together in boxes and build populations large enough to support honeybee pollination in valuable fruit trees.

It has taken many years of research to reach this point. “It is not as easy to work with blue orchard bees,” said Theresa Pitts-Singer, a research entomologist with the USDA Bee Lab in Logan, Utah who has been studying the species for the past 16 years.

The effort will be worth it if the BOBs can help. Every year up to 75 percent of the honey bees in America are brought to California in the spring to pollinate around one million acres of almond trees. As much as 80 percent of the world’s almond supply comes from California.

But, beekeepers are still losing an average of 30 percent of their hives to colony collapse every year. The price to pollinate with honey bees has doubled in the past decade and is now $185 to $200 per hive. At two hives per acre, it now costs roughly $500 million to pollinate California’s 1.3 million acres of almond orchards.

BOBs could help reduce pollinating costs to farmers and increase the reliability of almond production.

“If we can’t produce bees for a price that is competitive, then we need to get a bump in yield or bring our prices down,” said Jim Watts of Watts Solitary Bees in Bothell, Washington. His company has been raising BOBs to pollinate crops such as pears, cherries and almonds.

Replacing half of the hives in an almond orchard with BOBs can produce yields that are equal or greater.

Watts now has two million BOBs, enough to pollinate around 2,000 acres. He hopes to raise an additional 1.5 million bees in 2018 to lower the price from $0.40 to $0.30 per BOB by spring of 2019, making them competitive with the honey bee. He holds half of the bees he raises every year to raise more the following year.

Watts’ company’s stock of BOBs include about 1 million that it recently acquired from nut-farming giant The Wonderful Company, which recently ended a decade long research effort to raise the species, as reported by Scientific American.

For Watts, the goal is to one day raise 80 million BOBs, to match the number of leafcutter bees he produces every year. But it is a number that he says “is still a long way off.” It takes about 10 years to raise just a million BOBs.

Wonderful’s recent decision to end the BOB program came with a change in leadership and an assessment that the program was not financially feasible, they wrote in a statement to Inside Science. “We were unable to consistently achieve the level of female replication needed to make the program successful. We’re continuing to expand our honeybee business, with a goal of ultimately becoming self-sufficient,” they wrote.

“They were on the cusp of the breakthrough,” said Pitts-Singer, who has collaborated with entomologist Gordon Wardell, Wonderful’s director of bee biology.

Beekeepers like Watts have taken an atypical but cost-effective approach by farming the BOBs in flowering wildlands rather than under large netted cages like Wonderful, or trapping them in the wild like some other beekeepers do.

Part of the issue is the life cycle of BOBs. Rather than forming a large colony throughout the year like honeybees, the sole purpose for each female mason bee is to use its six weeks of springtime activity to make eggs to produce more BOBs for the following spring.

During spring, adult females place a pollen ball inside each nest cavity. They lay female eggs in the back of tunnels and males in the front. They fill each cavity with provisions and a single egg, then close up the cavity with mud. They repeat the process until the tunnel is full. By late summer, the eggs will have hatched and molted into cocoons. The bees emerge as adults in the spring. In contrast, the worker honeybee reproductive process requires only 24 days to produce a flying adult.

The BOBs make up for their pace with efficiency. In February, when California’s almond trees are in bloom, BOBs will venture out to collect pollen in days that barely reach the 50 degree mark, while honeybees are more apt to avoid such temperatures. Because honeybees attach pollen to their back legs, they tend to spread less of it than BOBs, which collect it on their furry bodies. It only takes 400 female BOBs to replace the pollination efforts of 15,000 honeybees.

Farmers raise, rather than rent BOBs. Beekeepers sell farmers an initial stock, then educate farmers on how to coax the bees out of their cocoons to pollinate flowers in orchards.

Watts has spent the past ten years raising stocks of BOBs in their native wildland habitats seeking out prime locations for his bees from the Canadian border to Oregon.

Wardell, who was Wonderful’s BOB manager and who has left the company, said that for farmers to become excited about adopting BOBs for pollination in orchards, the price needs to drop even lower, to $0.20 per bee. But even at that price they wouldn’t replace honey bees. Wardell and Watts believe it will take at least another decade for the BOB industry to become comparable to the leafcutter bee and honey bee industries.

For now, farmers are using the BOBs in combination with honey bees as an insurance policy against bad years. “It was never my intention to replace the honey bee,” said Gordon Wardell from Wonderful. “Nature does not rely on one pollinator.”

But, Wardell says interest in honey bee alternatives is growing rapidly. Since Wonderful ended its BOB program, growers from around the world are contacting him to learn how they can use their own native Osmia bees in their farms. Farmers in Europe have been using native Osmia bees native to their respective countries for the last 15 years.

“All of the research I have done in my life, I have never felt so privileged,” said Wardell. “It is encouraging to see so many people interested in Osmia.”