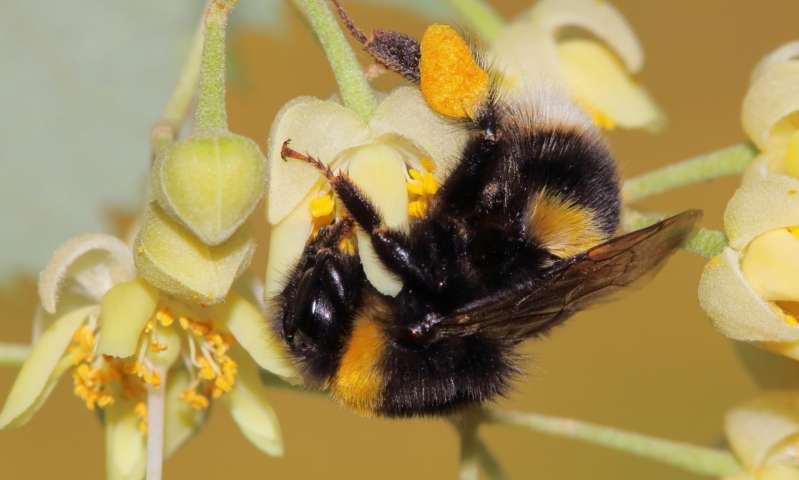 Public interest in bees is intense. There’s rarely a week that goes by without a story in the press about populations plummeting. Although most of these stories focus on chemical pesticides, other factors may also be affecting bee survival. At Kew, we’ve been studying bees for years, and investigating how the plants they visit for nectar and pollen may play a part in their survival. Nectar and pollen are the main sources of protein, sugars and fats for bees, but these rewards that plants offer in return for the bee’s pollination service may contain other plant chemicals, some of which may be bioactive or toxic. We are particularly interested in these substances because while some may harm bees, others may be beneficial.

For example, the nectar of monkshood (Aconitum) contains toxic alkaloids. We’ve shown that these toxins deter the buff-tailed bumblebee from robbing nectar from the flowers without pollinating, but the garden bumblebee, a legitimate pollinator, can tolerate higher concentrations of these substances and continues to visit and pollinate. Similarly, toxins in the nectar of Rhododendron species can deter or even kill honeybees, while bumblebees, who may be the preferred pollinators of rhododendrons, are not affected.

Toxins in nectar can therefore help plants to filter out bees and other pollinators that don’t do a good job in pollinating their flowers, and restrict visits to genuine pollinators. But there is one story about bee poisonings that we’ve known for years but it’s still not easy to explain…

Every year, we’re contacted by concerned people who have seen dead or dying bees under some of our flowering lime (linden) trees, particularly under Tilia tomentosa (silver lime). This mysterious sight has been reported for many years, across many countries, and regularly makes the news. Understandably, we wanted to find out more. 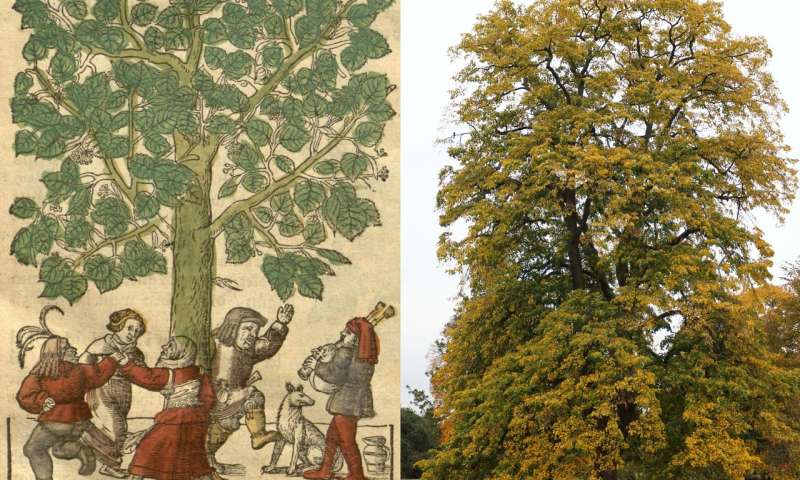 The earliest proposed explanations pointed the finger of blame at nectar toxins. However, more recent research suggests there is nothing in the nectar that is poisoning the bees, so something else must be going on.

Some studies have shown caffeine to be present in nectar, and while in itself it may not be poisoning the bees, we think it may be affecting their judgement. Two earlier studies have shown that caffeine can enhance the memory of bees for floral traits such as odours that are associated with food. Bees may be tricked into overvaluing a caffeinated food source, and will keep returning to it even if it is inferior to other food sources, or completely depleted. Lime trees are noted for their far reaching, sweet scent. Maybe this odour together with caffeine in the flowers could result in a fatal attraction of the bees to the point where they run out of energy and starve?

Even though dying bees under lime trees have been observed for over a hundred years, we still don’t fully understand this phenomenon. More work needs to be done to better understand the chemistry of nectar, pollen and odour, and its effects on bees. At Kew, we are working to address these questions. City trees provide us with important health benefits, such as filtering polluted air with their leaves. Some city trees are also abundant nectar and pollen sources for pollinators, a role that is often overlooked. To help maintain abundant and healthy pollinators, we need to better understand the positive and negative effects of the different, often non-native, trees we are planting in our cities. 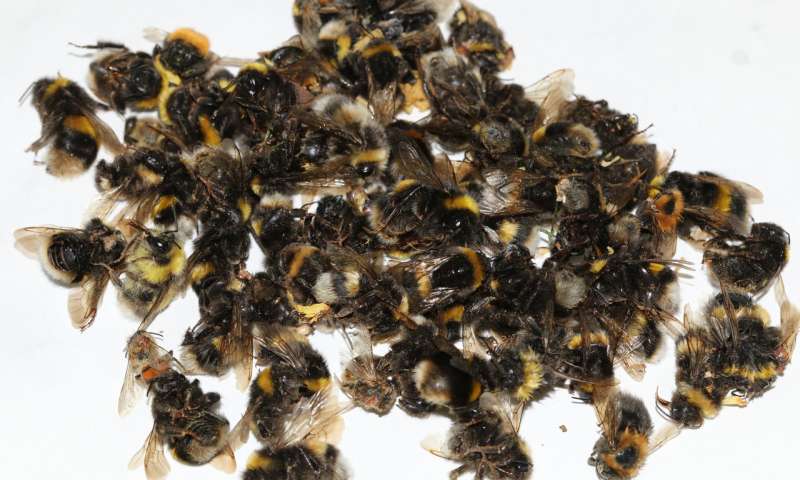 Bumblebees and honeybees found dead under a silver lime tree at Kew on a single day in August 2016. Credit: Koch, H