The feared demise of bumblebees could bring the evolution of the plants they pollinate grinding to a halt – leaving them vulnerable to new diseases and other threats – a new study suggests.

Researchers in Switzerland tested what happened when field mustard plants were pollinated solely by bumblebees or hoverflies over nine generations.

The results were dramatic: the bee-pollinated plants grew taller and produced twice as much scent.

But perhaps the most alarming finding was that the plants left to the hoverflies showed a 15-fold increase in the ability to self-pollinate.

This means the plant reproduces itself, without any genetic input from another plant.

If this asexual reproduction becomes commonplace, the plants would struggle to evolve to adapt to new threats, for example from pests moving into an area as the climate warms.

The decline in bee populations has been causing alarm, partly because of their key role as the pollinators of food crops. 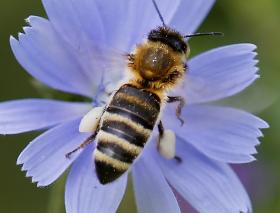 The European Union is currently considering whether to licence the weedkiller glyphosate, the main ingredient of Roundup, which has been linked, controversially, to cancer in humans and sub-lethal effects on bees.

Other chemicals used by farmers are thought to be have had a devastating effect on bee populations.

Professor Florian Schiestl, of Zurich University, told The Independent: “Bumblebees and hoverflies have different preferences when the visit the flowers. Those preferences decide which plants are being visited by the pollinator and that means which plants mate with each other.

“The bumblebee-pollinated plants were taller and the hoverfly plants had more self-pollination.”

A paper in the journal Nature Communicationsabout the research said: “Hoverfly-pollinated plants, however, showed a 15-fold increase in the ability to produce seeds without pollinators (that is, autonomous selfing).”

But it added: “Notably, components of inbreeding depression (seed weight and germinationrate) did not differ between pollination groups.”

The researchers cautioned that the study had been carried out in a lab, rather than the real world, and had only involved a single species of bumblebee, hoverfly and plant.

But Professor Schiestl said: “I think there are many reasons why we should not destroy our bees. I think we have added one more to them.”

If plants change to become less attractive to bees, this could increase the pressure on them.

“This may have a long-term effect that may not be reversible. Nobody knows if this can be reverted to a trait that is attractive to bees. We may be going down a one-way road,” Professor Schiestl said.

He made clear the dangers of self-pollination over a long period.

“Self-pollination reduces genetic variability in the population. The same individual mates with itself. The idea of sexual reproduction is to increase variation,” he said.

“If that stops, it’s basically a kind of vicious circle. You have less genetic variation so you have less potential to respond to different selection pressure.

“You can reach a stage where you have no genetic variation. Such a population cannot evolve anymore, [for example] to develop resistance against a pathogen.”

Friends of the Earth bee campaigner Paul de Zylva said the study underlined the importance of bees as pollinators.

“Bees aren’t the only pollinator, but many plants will not thrive if they are only visited by other insects, as this new research shows," he said.

“But Britain’s bees are under threat, and we can all do more to help them – such as by growing pollinator-friendly plants, avoiding pesticides and turning gardens and other spaces into bee-friendly habitats.