With the Varroa destructor mite a pernicious pest of managed honey bee colonies across North America, beekeepers have a variety of control methods to choose from to reduce the mites’ impact on their hives. Which ones do they most prefer?

To answer that question, researchers at the University of Maryland and the Bee Informed Partnership analyzed four years of data from surveys that asked beekeepers about their Varroa-management methods. Their findings, reported in a new study published in April in the Journal of Economic Entomology, highlight a wide variety of combinations of methods used and indicate a lack of any perceived “silver bullet” option for controlling Varroa mites.

Haber says these insights into use of Varroa-management methods “take into account important considerations such as affordability and logistical constraints associated with different practices. Thus, the findings can inform future experiments that directly test the efficacy of different Varroa management practices that beekeepers can realistically use.”

The survey data, which Haber analyzed with University of Maryland colleagues Nathalie Steinhauer and Dennis vanEngelsdorp, Ph.D., covered nearly 19,000 responses over a four-year period, asking beekeepers about their use Varroa-management methods among the bevy of options currently available: 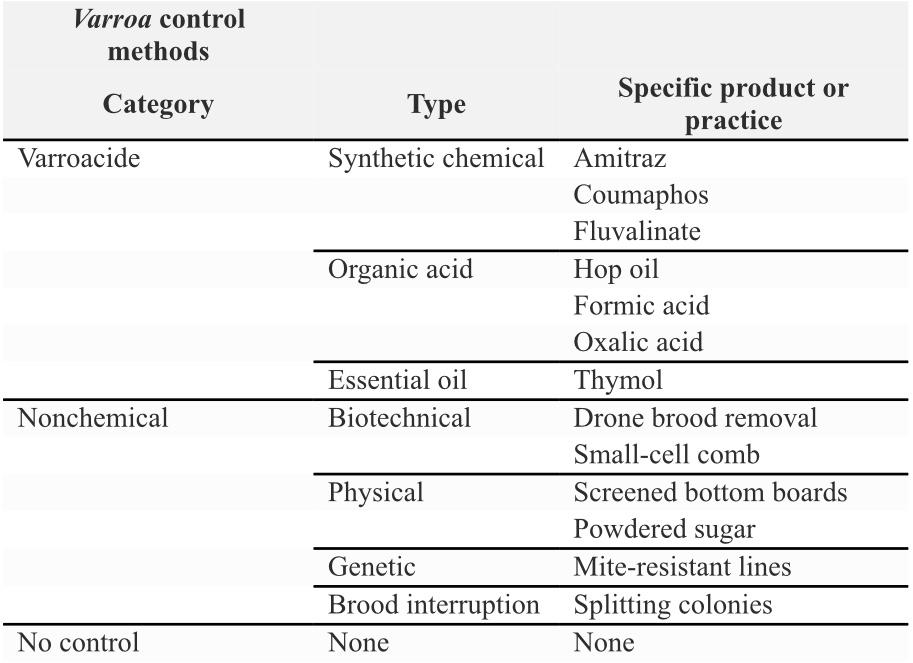 Beekeepers were also asked about colony losses. Across all types of beekeeping operations, use of varroacides was associated with lower colony loss, with amitraz associated with better colony survival than all other varroacides. Meanwhile, among nonchemical methods, splitting colonies was associated with the lowest levels of colony loss, “although our results suggest that nonchemical practices have limited success as stand-alone controls,” the authors note in their report. The survey did not ask about intensity of Varroa infestations or other factors that can influence colony survival, so Haber and colleagues stress that the results are only observational and shouldn’t be interpreted to infer causal links between Varroa-management methods and colony survival rates.

The primacy of chemical management methods, however, indicates the ongoing challenge beekeepers face in managing Varroain their honey bee (Apis mellifera) colonies. Repeated use of varroacides has led to Varroa populations evolving resistance to at least two previously effective products. “Even though evidence from our study and from other studies suggests that chemical treatments tend to be more effective than nonchemical practices for controlling Varroa, we should be cautious in interpreting the results of any varroacide efficacy study and in making recommendations to beekeepers, as it is unlikely that any chemical control will be effective in the long term,” Haber says.

More broadly, Haber says she sees the intensive operations of managed honey bee pollination services in agriculture as an environment with multiple factors contributing to honey bee colony losses, such as low-quality pollen diets in monoculture crops to high-density colonies. “This suggests that honey bee colonies in the U.S. will be vulnerable—to problems we have already seen as well as new, unforeseen problems—as long as we keep our current system in place,” she says.