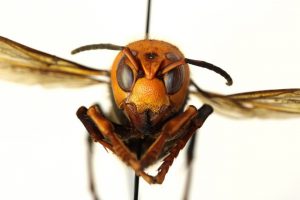 Beekeepers have a new resource if they suspect the invasive Asian giant hornet is attacking their honey bee colonies.

“We want to dispel some of the fear that beekeepers have been feeling around Asian giant hornets,” said Kelly Kulhanek, a postdoctoral researcher in WSU’s Department of Entomology and lead author of the publication. “Our goal is to help them identify specific symptoms of giant hornet attacks and distinguish between that and something with similar damage.”

It’s important to note that, to date, there have been no confirmed honey bee colony losses in North American because of giant hornets, sometimes referred to as “Murder Hornets,” according to Kulhanek and her co-author, WSU associate professor Brandon Hopkins.

“We assumed from all the media reports about the hornets that we would be getting frequent reports of attacks,” said Hopkins, a scientist on WSU’s honey bee and pollinator program. “And we have, but they’ve all been colonies killed by other things.”

The most noted symptom of an Asian giant hornet attack on honey bees is headless bees. But other hornets, such as yellow jackets, cause similar damage to colonies. Other animals do as well.

Hopkins saw that first-hand in a colony at the WSU Honey Bee & Pollinator Research, Extension, and Education Facility in Othello.

“When we started keeping bees near the new facility, we noticed dead bees with their heads torn off and thorax chewed out,” he said. “But we found it was caused by mice.”

Hopkins believes the mice were feeding on bees that died naturally and were already on the bottom boards of the colony boxes, or on the ground outside the hive entrances.

The new publication talks about more specific signs that bee deaths are caused by Asian giant hornets. There are two phases to their attacks. Phase one is picking off individual bees and carrying them back to the hive to feed on. During this phase, no dead bees are left around the colony because they are carried away to another location. The second is called the “slaughter phase,” when a bunch of hornets show up at the hive to feed on and decimate the colony.

“We’ve learned from Asian giant hornet experts that if there are dead bees around a hive, but there are no signs of the hornets, then it’s probably not Asian hornets,” Kulhanek said. “By the time the slaughter phase happens, it’s super obvious and too late to do anything.”

Another note involves geography. Asian giant hornets have not been spotted in North America outside of a few locations in Northwest Washington and Southern British Columbia.

“I’ve gotten texts from beekeepers from as far away as North Dakota concerned their colony had been attacked by Asian giant hornets,” Hopkins said. “I tell them that’s not really possible for several reasons.”

Beekeepers in areas where the invasive hornets have been found can take precautions, detailed in the publication, such as restrictive netting or screens around the entrance to a colony.

“The hornets are very large compared to bees,” Hopkins said. “There is promising research on defensive netting that bees can get through but the hornets can’t.”

That wouldn’t stop the first phase, when invaders pick off individual bees coming and going to the colony. But it would dramatically slow or stop the slaughter phase, when hornets enter a colony.

WSU entomologists has heard from experts in the hornets’ native range. In Thailand, for example, beekeepers sometimes hire school-age children to swat hornets flying around their colonies with badminton racquets.

“Beekeepers should be extremely cautious when approaching a colony if they think Asian giant hornets are present,” Kulhanek said. “After the slaughter phase begins, the hornets will become very defensive of the hive and will attack anyone who approaches.”

The best hope for the broader beekeeping community is eradication of the invasive goliaths. To that end, the WSU researchers urge beekeepers to report any suspected sightings to the Washington State Department of Agriculture.

“Asian giant hornets are new and scary and have gotten a lot of attention,” Hopkins said. “But they create similar problems and damage as yellow jackets and other predators. Take preventative measures and keep an eye out. That’s the best thing you can do.”